Nestled between the cloud forest and ice-cold pristine rivers is the small town of San Gerardo de Rivas. Popular mainly amongst hikers, birders, and nature enthusiasts, this place is perfect for deeply diving into the unique ecosystem of this area, exploring the traditional Tico lifestyle, and maybe even hiking to the top of Costa Rica´s highest peak…

San Gerardo is located in the southern zone of Costa Rica on the pacific side. It is the last town before reaching the Chirripo National Park and attracts mostly hikers, birders, and nature enthusiasts.

The village itself is at 4000 feet while the Cerro Chirripo, the highest mountain in the country, reaches an altitude of 12,533 feet.

The village is located on the Chirripo Pacifico River and the riverbeds full of boulders in crystal clear water are one of San Gerardo´s most enchanting traits.

Visiting a volcano? Check our top 7 picks for best volcanoes to visit in Costa Rica.

Getting there and away

To reach San Gerardo de Rivas, you will take either the Pan American Highway on the route of the Cerro de la muerte or you take the coastal road that allows you to stop by some beautiful beaches on your way to the southern zone.

In any case, you will reach San Isidro, which is about 3 hours driving or by bus from the capital and the biggest town in this region of the country. If you are lucky enough to come on a Thursday or Friday, the feria or farmer’s market is worth a visit, you can find all kinds of foods and fruits and watch locals and expand community using this as a place for social gatherings.

When you make your way up the mountain, it can be helpful to bring cash up, since there are no ATMs up in the mountain and some businesses only accept cash.

There are several busses a day leaving San Isidro´s central bus station towards San Gerardo. If you have your own vehicle, you will be driving about half an hour along windy roads following the river upstream.

The weather in San Gerardo follows the typical patterns of the warmer dry season with hotter days and colder nights and the rainy season with constant rain in the afternoons. Due to its high altitude, the area is much cooler than the Costa Rican average, which is perfect for long days of hiking!

Right in the centre of San Gerardo is Robino´s Restaurant, that serves Pizza and delicious trout pie in a relaxed atmosphere. If you want to try some local cuisine, trout restaurants like the Truchero los Cocolisos are an excellent choice.

Further down the mountain from San Gerardo, in Canaan, is the Batsu Restopub serving good burgers and organizing live music from time to time.

When in Canaan, you have to stop by the Swiss cheese place. A local family, that raises their own goats for milk, makes here aged cheeses, arguably the best in the country.

In the area around San Gerardo, there are some nice places to stay that can be found on Airbnb. If you are a couple or come solo to the mountain, Robino´s Restaurant in the centre of town offers the perfect little spot with your own kitchen, a little balcony with river view and beautiful birdwatching.

There is also a rustic hostel in town that caters mainly to hikers and whose owner is the right person to get nerdy about birds with. If you want to be closer to the park and other hiking opportunities, the Hotel Uran and the Casa Mariposa are popular choices.

The latter is a beautiful wooden construction and the Hotel is led by a welcoming couple that gives a homely family-vibe to this place.

An excellent way to see the cloud forest around San Gerardo is a visit in the Cloudbridge Nature Reserve. It is much less of a climb than a visit to the National Park but has beautiful waterfalls and amazing wildlife.

This private reserve also contributes a lot to research of wildlife in the area and has very friendly and helpful volunteers that will help you get oriented.

The sunniest months are January, February and March, while temperatures peak in April. While the seasons are very reliable in San Gerardo, the mountain itself gets climatic influence from the Caribbean side, which means that even in the dry season it can be cloudy or even rain up there.

The best time to explore the Chirripó National Park is in the dry season. Not only do you not have to worry about getting wet, you will also have the most stunning views.

And while climbing Cerro Chirripó surely also has its charm in the rainy season, it gets really cold and cloudy around the top. And there is just nothing like seeing both oceans from the top of the mountain after two days hiking.

Experienced hikers prefer the month of April to visit the Chirripo National Park, but the spots fill up quickly.

In order to get a permit and be able to visit the Chirripo National Park, you need to reserve with the SINAC, a government office that manages the entrance to several National Parks.

Since it is a different company altogether that manages the refugio or base camp, you need to also show up there and pay a separate cost. The base camp was just renovated and has space for around 40 people.

It is recommended to bring the least amount of things as you will feel every extra ounce on your back on the hike up. Nonetheless, a sleeping bag, some nice warm clothes to change into at night and snack mix nuts can save your day!

Since there have been problems with fires in the past, cooking in the National Park is forbidden and since everything that is served in the Crestones base camp has to be carried up on horseback, the prices are accordingly.

You will totally forget when you see the sunrise from the Caribbean side and stand on Costa Rica´s highest point. If you were not lucky enough to get a permit or do not want to go all the way to the top, you can go up about 2.5 miles on the Chirripo trail, before it becomes the National Park and you will see park rangers controlling for permits.

On this path before the official entrance of the park, you can easily spot beautiful orchids, birds, monkeys and huge trees. You can even loop from there into the Cloudbridge reserve to explore it in the same day! 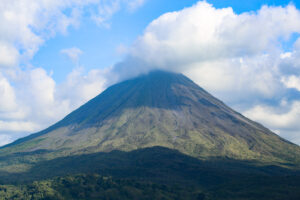