Top 5 Volcanoes You Must Visit in Costa Rica

While there are over 61 volcanoes in Costa Rica, these are the top 7 you should try to visit on your next trip.

There are plenty of opportunities to see volcanoes in Costa Rica- in fact, you’ll be hard-pressed to miss seeing a gorgeous view of one when traveling to the country. There are only a few, however, that are worth a visit.

Each of these volcanoes has a national park with ample (and safe!) opportunities to see the volcanoes. The tops volcanos to visit in Costa Rica are (in alphabetical order):

About Volcanoes in Costa Rica

An active volcano means the volcano must have erupted within the past 10,000 years. Almost all of the above volcanoes have exhibited volcanic activity in the past century.

There are three volcanic mountain ranges in Costa Rica- Guanacaste (north and west) Central (middle of the country) and Talamanca (south and a bit east.) Costa Rica is part of the Pacific ring fire circle, which is a ring of volcanos around the world that formed roughly at the same time.

Volcanoes are formed when two tectonic plates crash into each other. The plate in Costa Rica is known as the Cocos Plate, and it continues to move even to this day. this causes earthquakes and volcanic eruptions.

Whle you might not get to see all the volcanos in Costa Rica on your next trip, thee are the ones you should prioritize. Spoiler alert- Arenal Volcano at La Fortuna is my absolute favorite in the whole country, and one of the best places to visit in my opinion.

Located in the Central Valley just about 2 hours north of San Jose lies the majestic Arenal volcano. It is arguably Costa Rica’s (and maybe en Central America’s) most famous volcano. Nestled just above the cloud forest of San Ramon just driving to Arenal is an experience in itself.

The Arenal volcano is just north of the sleepy town of La Fortuna, known for its lush rainforest, friendly people, and family farms to visit.

However, the once active Arenal volcano was not so friendly- in 1976 it erupted and covered the entire town of La Fortuna, killing hundreds.

For many years, you could see the red lava flowing off the top of the volcano while enjoying the thermal springs below. Just a few years ago, however, the volcano became dormant, and you can no longer hear the rumblings or see the lava.

It’s still an amazing volcano to visit, the cone-shaped top is the stereotypical looking volcano. Add the zipline, hiking through the Arenal Volcano national park, floating across Lake Arenal (the largest lake in Costa Rica) and the La Fortuna waterfall, there is so much to do near Arenal. Plus, all of the activities give you ample views of every side of the volcano. Don’t miss Arenal Mistico Hanging Bridges, Baldi Hot Springs, Kalambu Water Park, Volcano Lodge and Springs or Eco Glide Zip Line if you are in the area.

This volcano is located just about one hour drive west of San Jose (depending on traffic). This makes it a great day trip from the city.

Located in the Cargato province and is the highest volcano in Costa Rica at 11,260 feet above sea level. (The highest mountain in Costa Rica is the Chirripo, located near Vara Blanca.

The crater is above the treeline, giving the whole feel of the volcano and surrounding area the feeling you are on the moon.

You can arrive at Irazu by car, driving through the strawberry farms of Costa Rica- feel free to stop and try some! You don’t need to hike the volcano through Irazu National Park as you can drive right up to the main crater on a paved road in your car. You can hike the area, though I recommend doing it with a guide in tow.

The Irazu volcano last erupted in 1994 and is one of the more recent of Costa Rica’s volcanos to erupt.

The Miravalles volcano is located just off the main highway between San Jose and Liberia. It is in the Guanacaste region (the region that lines the Pacific Coast) and its water flows into the Blue River, and in the dry season, you can see one of the most famous waterfalls- the Rio Celeste. The beautiful waterfall plunges into the most gorgeous turquoise water and is the main attraction in the area.

You can see Miravialles from both Bijagua area (where two of our favorite farms are located, La Carolina Lodge and Casitas Tenorio). On a clear day from near Miravalles, you can see into Nicaragua and the Pacific ocean.

If you know where to stop off the Highway 1, you can find bubbling mud pots if you hike a little bit. You can also say at the hot sprigs report nearby- Rio Perdido. It’s a bit fancy and definitely worth the splurge.

Located above the picturesque town of Grecia, the Poas volcano is arguably the second most photographed volcano after Arenal. There is an aqua blue lake in the middle of the crater, making it one of the most beautiful crater lakes in the world. Located in the San Gerardo de Rivas area there is so much to do nearby. This is definitely my second favorite volcano in Costa Rica.

Poas volcano has a gorgeous visitor’s center, well-paved hiked to the crater. You will see large-leafed plats called “sombrillas del pobre” (the poor man’s umbrellas), and potentially sloths and howler monkeys if you have a good local guide.

This volcano was closed for a year and a half after it erupted and was deemed unsafe for visitors. It is now open on a limited basis, and you need to get tickets before you go. You can find out more about ticketing information here.

Poas is a popular volcano because of all of the things to do around the area. It is located near Zoo Ave, La Paz Waterfall Gardens, and is a great day trip from San Jose. If you are leaving from San Jose it might be a good idea to book a tour to the area so that you don’t have to worry about tickets.

One of the northernmost volcanos in Costa Rica, this volcano is located just about 25 minutes northwest of Liberia, Guanacaste. Rincon the la Vieja National Park (literally translating to old woman’s corner) is easily accessed through Hacienda Guacheplein, a favorite place of ours to stay due to the natural hot springs included in your stay, plus the option to zip pine, canyoneering and horseback riding into the park.

You can also go to the parking lot of the national park, and hike to see sulfur springs, mud springs, fumaroles, and steam vents. I’d liken it to a small Yellowstone!

Nature lovers will love birdwatching in the area. There are strenuous hikes to the near top of the volcano, but definitely worth it when you see the views.

This volcano is located next to the Miravalles volcano, and the calcium carbonate in the mineral water is unique. When the water from Tenorio combines with the water from Miravalles, it forms a blue river that flows throughout the area.

A fun way to access this national park is to take highway 927 partway around Arenal Lake, making this a fun detour on your way to the beaches near Liberia.

Tenorio Volcano National Park entrance is located on the southwest edge of the park.

Turrialba National Park is one of the southernmost volcano national parks in the country, backing up to Braulio Carrillo National park as well.

Turrialba has had a large amount of volcanic activity in the past decades. (I was on a plane home to Colorado from Costa Rica and it exploded. The ash got into the plane’s wings and we couldn’t take off for days.) This means the volcano and park are currently closed and expected to be for a long time. Look for this volcano though, as you travel through the area- it really is beautiful and you might just see plumes of smoke when you pass. 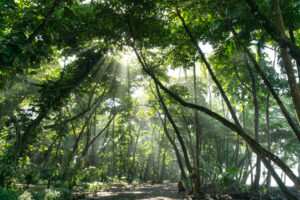 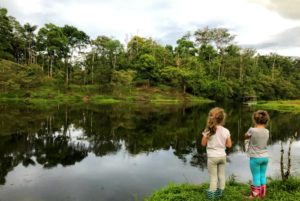 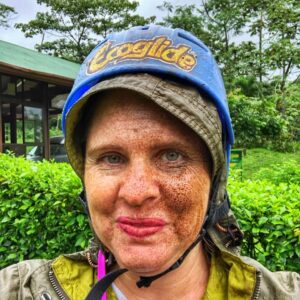